GIVE
Get Connected
Search
☰

An exciting new opportunity to join our team! 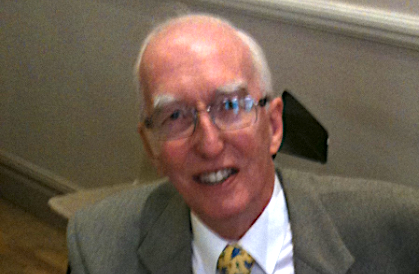 A Tribute to James Price

Here is my appreciation of my friend James (Jim) Price. He died aged 77 on 27th September. He was a Chapel member for 50 years. Because you can’t really talk about Jim without at the same time talking about his wife Muriel (who survives him) I am taking Muriel into this tribute as well.

Jim was from Northern Ireland. He started attending Chapel upon moving to London in 1962 where, later, he and Muriel met. Jim was a civil servant and Muriel was then a nurse at Westminster Children’s Hospital. They were married in 1972. Most of Jim’s long civil service career was spent in the Court Service.

During the time they attended Chapel until they left to attend a local church in 2012, the Prices were actively involved in various ways in the life and ministry of our church. In the 1970s, they were part of what would now be our 18-30s group. Jim became a deacon (at the same time as me!) in about 1987 when R.T. Kendall was our minister. He served both under RTK and for much of Greg Haslam’s time as well. He became our Church Missionary Secretary in the 1990s and was also a Chapel trustee. Muriel was a legend in the work amongst the Chapel’s Sunday ministries to our younger children. I think she worked faithfully in this for over 20 years.

They also produced three amazing children – Anna, Andrew and Tom, all of whom, like my three children, moved through the ranks of Chapel creche, Sunday school and youth group. All three of them have come to faith in Jesus Christ. Anna, the eldest, became Anna McDowell!

The ministries Jim and Muriel led or were involved in only really tell half the story about the significance of their time at Chapel. I would say that the biggest impression they made on the church was relational. Each of them was a “people” person. As well as being part of the Sunday stewarding team Jim quietly undertook his own ministry enquiring after people’s wellbeing. He was a great encourager. Muriel also took an active interest in various individuals’ wellbeing.

Jim could very occasionally appear a bit dour(!) but that belied a sense of humour that came out at some point in every conversation you had with him. And of course there was the laugh! It was the undoing of him – uncontrollable and all-consuming! It will forever feature centre-stage in my memory of him! But above everything, he wonderfully characterised the Apostle Paul’s words in Romans 12 v 10 “Be devoted to one another in brotherly love”. And in Paul’s words in Philippians 1 v 3 “ We thank God for every remembrance of him.”

Jim and Muriel were friends of my parents.  Mum and I often used to pop round to see Muriel when I was small as they lived near to us.  As I got older, I used to babysit for the family. When my Dad occasionally worked on Sundays, Jim used to come and pick us up in the church minibus and take us to church.  I remember being wary about how Jim used to drive so much faster than my dad, but he always got us there safely!!  I remember he would always have a cheeky sparkle in his eye and had a great sense of humour when teasing me in his unusually soft northern Irish accent.  He was a kind and gentle man who loved his Saviour and his family.  He served as a Deacon for many years and took on the role of Missionary Secretary which he was very passionate about.  I saw Jim recently about 8 weeks ago and although he was frail, I could still see that determined, cheeky driver I remember from childhood sitting behind the wheel of his car waiting patiently for Muriel.

Get Connected, download sermons, join a Life Group, keep up with events - stay up to date, wherever you are.

Westminster Chapel provides free audio downloads of its Sunday messages so you can access them from your computer or mobile device.